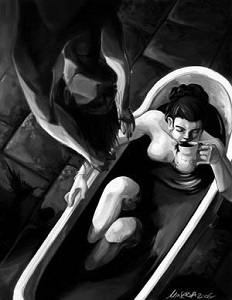 When it comes to real-life vampires, history has plenty of accounts to share.

We start with the Blood Countess, the original vampire, Elizabeth Bathory. A Hungarian Countess, Bathory is infamous… so much so that she is in the Guinness Book of World Records as the most productive female serial killer in history. With a reported 600 murders under her belt, I daresay no woman will unseat her throne anytime soon. It is believed that, besides Vlad Tepes, she is the other main inspiration for Count Dracula.

Bathory believed the blood of adolescent and prepubescent females would keep her looking young and beautiful after she slapped a chambermaid and the girl’s blood dripped on her hand. Days later, she noticed the skin there appeared more youthful and radiant. This revelation would spawn a monster. Her resulting obsession with youth caused her to murder over 600 virgins throughout a span of 20 years, whose blood she drank and bathed in. When she ran out of her own servants and castle staff, she began having girls brought to her from nearby villages.

Bathory met with no resistance because she took peasant girls from neighboring villages and abused her position as royalty to protect her from backlash. She therefore had no legal or moral accountability, knowing that she could not be tried for her crimes even if she was ever caught. When those sources ran dry, she began attacking and killing the children of noblewomen, who had been sent to her for training as courtesans.

The townspeople had been reporting her to the authorities, but no one paid any heed until the children of nobles began being targeted. After all that time, her deeds had finally become known to King Rudolf II after decades of the bloody games. When a raid on her castle unearthed the remains of over 300 women and a diary with written accounts of over 600 atrocities, she was taken into custody. Investigators actually caught Bathory in the act of torturing a young girl, leaving any way to excuse the rumors and the diaries off the table. Four accomplices were arrested. Three were killed, one escaped imprisonment.

As for Bathory? Despite her horrific misdeeds, she was still a Countess. They felt a trial would be too public and embarrassing for her, so they locked her up in her room at the castle, leaving slits for air and food to be passed through. It’s rumored that she died in 1614, but her body was moved. To this day, no one knows where her remains are located. Rumor and exaggerations claim that she still appeared to be 30 years old, even though she was over 50 at the time of her death.

“Dracula” was published in 1897 and eventually made its appearance in 44 languages and over 250 films. What most people don’t know is that “Dracula” never existed. The story was a mish-mash of various vampire stories from around the world. Elizabeth Bathory was only one part of the inspiration. Another was Vlad Tepes.

Vlad Tepes Dracul was an ancient Romanian ruler. Born in 1341, he was a prince whose job was to protect his subjects from the invading Muslim Turks. He was cunning, sadistic and came up with horrifying and tortuous deaths to those he murdered.

To make his point to invaders, he used brutal and barbaric means to dispose of his enemies. To dishonor the soldiers, he would impale them on tall stakes and leave them to slowly die an antagonizing death high on a hill surrounding his castle, where all could see. He used to bring a dining table and chair out and dine while the men died. People also say that he dipped his bread in the running blood, to supposedly absorb their power and strength for himself.

The thing is, Vlad Tepes was a ruler during a time of war. What he did, he did to protect his people. In order to survive war, you must make your enemies fear you, and in that, Tepes excelled. To this day, there are many in Romania who consider Vlad Tepes a hero and a protector, not a monster. They state that he did what he had to do for the time. When it came to protecting our loved ones from slavery, torture, and death, could we honestly say there’s anything we wouldn’t do?

Still, rumors of Tepes abound, including that he arose from the dead to murder all the priests who refused him a proper burial because of his horrific deeds. His vicious bloodlust earned him the honor of being one of history’s first documented vampires, as he lived centuries before Bathory did. These two combined created the world’s first fictional vampire, Bram Stoker’s Dracula. But were there others? History, like mythology, contains far more.