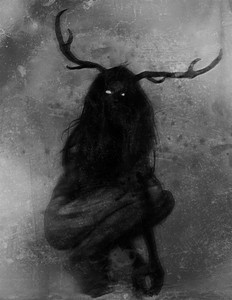 Hunger beats at you, a thirst like you’ve never known before. You’re ravenous, but no matter how much you eat, you can’t satiate your appetite. There’s only one thing you crave, the only sustenance you know might give you a few moments of peace from the gnawing ache in your stomach, but to dare is to forsake your last vestiges of humanity… to cross the ultimate taboo. To be tempted too far is to be damned. Cursed.

This is the tale of the Wendigo, a First Nations mythological creature. Wendigo stories proliferate during the winter, when the season gets harsh and providing food for families becomes harder. It’s a tale of what awaits those who stray from their moral compass. Those who turn to other sources of nutrients in desperation, those who partake of their fellow man, are considered evil… monstrous. Thus, according to Native American legends, they become a monster themselves.

All descriptions have certain things in common. The Wendigo is pale skinned and gaunt, the ribcage exposed. Sometimes, the organs are exposed as well. The creature is emaciated and appears starving. One look alerts any unlucky onlookers that this thing is hungry. The Wendigo stinks of death and decay, literally withering away even as it gorges itself on human flesh. You see, no matter how much it eats, it will never be satisfied. Many claim the Wendigo has no lips or tongue, as it will eat them in its pursuit of blood and flesh. Some say the creature is giant, far larger than a human, as every meal simply makes it grow, so it can never be truly full. To complete the fearful picture, some descriptions include antlers or horns, or even an animal-like skull atop a more human body.

The scariest claims are that sometimes, a person won’t even realize they are possessed by a Wendigo. In order to hunt more efficiently, they can appear to be their usual human selves to assimilate back into their tribe, unaware they’re not themselves. Only quick-acting family and friends of the victim can save the day after the unsuspecting Wendigo reveals its hunger, once its already hidden away in the confines of the community.

In the case of Swift Runner, a Cree trapper from Alberta, he was found to have butchered and eaten his wife, brother, mother-in-law, and five of his six children during a particularly harsh winter. Suspicions were aroused about his claims of starvation as Swift Runner was robust and healthy when he finally made it into town. Authorities found unmistakable evidence at his trapping cabin of his misdeeds, and realized he was close enough to an emergency outpost that he could have gone for supplies. Ultimately, he was hanged. To the general populace, Swift Runner was a murderer. To the First Nations people, this was a clear case of a Wendigo possession. Swift Runner was said to be well-liked and a soft spoken, polite man. No one who knew him believed he was capable of something this horrendous without Wendigo interference.

How did Swift Runner become a Wendigo? For some, it happens by crossing the ultimate taboo… by resorting to cannibalism in your darkest hours. No matter the reason, once you’ve done something so terrible, you are a cursed soul, damned to walk the earth never slaking your new hunger for human flesh and blood. In some legends, however, just coming into contact with a Wendigo can put your soul in danger. A Wendigo can choose to kill you, to eat you, even to attack you. If you come into contact with one, pray for death. If a Wendigo attacks and you survive, their curse can be shared with their victims, much like vampires or the modern-day zombie.

Looking at it symbolically, the Wendigo covers many concepts that are integral to helping a myth survive as it passes through generations. It serves as a warning, a lesson, and brings people together. You must prepare well for winter in order to take care of your family. When you can’t, you have to be able to rely on your community. It teaches the horrors of what happens to people who don’t heed the warnings, a lesson to those who choose to be selfish and only think of themselves. The stories are an introduction to the sins of gluttony, violence, and the darkest sides of human nature. At its heart, the Wendigo legend is terrifying because it reminds us of the thing we don’t like to face when we look at ourselves. We are our own demise. In the end, the scariest monsters are always human.