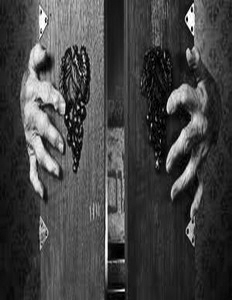 There’s nothing quite like finding a hidden treasure. Whether it’s at a thrift store, garage sale or online, there’s a reason the phrase “One man’s trash is another man’s treasure” was coined. For some, it becomes their life’s passion to seek out unique items, to surpass what they’ve already found. Others turn it into a business, flipping and reselling the more interesting pieces. Few give much thought to where the item came from, or the lives it lived before it came to rest in their hands. Should we, though?

No one wants to discover their dining room table was once used to host dinner for Jeffrey Dahmer, for example. A subset of people would surely be interested, of course, but they’d want to know before purchasing, not by finding out later via horrific means. This is exactly what supposedly happened to Kevin Mannis from Portland, Oregon. According to Kevin, he purchased a Jewish wine cabinet from an estate sale as a birthday gift for his mother. The seller was the granddaughter of the original owner, who seemed very relieved to be rid of it, cautioning Kevin that it was never to be opened.

Kevin would soon learn why.

Not long after the purchase and subsequent opening of the box, multiple employees quit his cabinet shop, citing break-ins, glass smashing, and foul odors of cat urine. He found one loyal employee curled up in a corner sobbing. Two years of service, and she refused to step foot in the building again. What did she experience? We’ll never know, as she refused to speak about it again once she left the premises.

Upon giving the gift to his mother, she had a stroke, and signed to him in the hospital that she hated her gift and not to give it back to her. His siblings and girlfriend then became caretakers of the box, each returning it within days due to the negative energy and odors emanating from the unassuming wooden cabinet. With no other options, Mannis took the wine cabinet to his own home for safekeeping. Here, as with most horror movies, the rest of the audience is wondering why no one took a sledgehammer to this thing, right? Or at least threw it in a river. Curiosity kills more than the cat sometimes.

Once the box was in his residence, Kevin began having nightmares. Come morning, he’d wake with bruises where he’d been beaten by a demonic figure in his dreams, but the bruises had no rational explanation. Upon further research, it was discovered the dreams occurred in everyone who held possession of the Dybbuk box. All dreamed of a hag-type demonic figure beating them within an inch of their lives, then woke to find themselves covered in inexpiable bruising.

Odd things seemed to happen around the Dybbuk box. Centipedes and bugs were drawn to it. A strange white mold grew around it, seeming to kill spiders and other insects that got too close. The odors changed, depending on who was around. Some smelled the overpowering stench of cat urine, while others could only smell Jasmine. Shadow creatures seemed to dart and lurk about in its vicinity. A fire alarm went off in the room the box was held in, despite there being no evidence of fire. Desperate, Kevin put the box up for auction, attempting to find a buyer to get it safely away from his family.

So what is a Dybbuk? What was in the box? Could it have actually been haunted?

What we do know is the box was made of acacia wood, and measured 12.5″ x 7.5″ x 16.25. In ancient times, the acacia tree was said to protect against danger and keep away evil. Many chose to carve protective amulets and talismans from acacia. However, it could also be a symbol of death and evil itself, as the leaves, when combined with other components, could be made poisonous. Therefore, the wood itself can be a clue. Was acacia chosen specifically to keep something evil trapped within?

Inside the box were two wheat pennies, two locks of hair, a granite statue engraved with the word “Shalom”, a dried rosebud, a golden wine cup, and a cast-iron candlestick with octopus legs. An odd assemblage of items, no doubt. However, each did have some symbolism we can find and discuss in terms of why they’d be placed together in such a box, if we believe it was meant as a prison.

Prior to 1982, pennies had a higher copper content than they do now. Copper has been well-known as a healing metal all the way back to the ancient Egyptians. When it comes to metaphysical properties, copper is said to help clear negative energy and promote spiritual healing. Granite is said to be a protective stone, to ward against threatening forces, and the word Shalom itself is translated as “peace”. Rosebuds, again, are good for protection.

As a Pagan, nearly all rituals are stronger if you include a part of yourself in them, to tie yourself to them, and give yourself something to focus on. This can easily explain the hair and the candlestick, as ritual objects to strengthen the spell. Wine, as well, could be used during the ritual for protection as many take consecrated wine during communion.

According to Jewish folklore, a dybbuk is the malevolent spirit of a person who must accomplish some goal before it can pass on. They wander and possess humans until they’re exorcised. Unlike demons who were never human, a dybbuk was once a human, but it no longer has any human qualities. As dybbuks must possess or inhabit something to take form, an exorcism simply releases them back into the world… they will continue to find new victims until they’ve finished whatever they need to do before they can leave this world.

As with all hauntings, a case can be made for a spirit sticking to what it knows… returning to its home, known family members. The people it spent most of its life with. It isn’t a stretch of the imagination to wonder if a family, tired of being haunted by a wandering spirit, decided to take matters into their own hands. If a spirit is trapped within a confined space, it can no longer harm anyone. Or can it?

After all, in the world of the unknown, we are sadly only human. When it comes to fighting monsters of the dark like the dybbuk, whether real or imagined, we are woefully unequipped. Next time you see the perfect trinket at an estate sale or auction, stop and ask yourself… what horrors might this unassuming item have seen? What might I be inviting into my home?