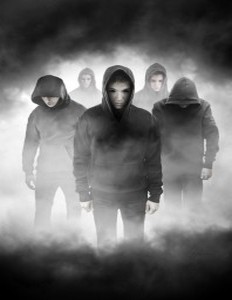 A child at your door or car window with a friend or two, asking to come inside, to make a phone call, or for a ride. It seems innocuous, but your gut screams at you. Shrouded in shadow, something seems ‘off’ about the children. Chills race along your spine, the hair on your neck and arms stands straight up. You crack the door or roll down the window slightly… whether to answer yes or no, it doesn’t matter. The children step into the sliver of light. Fathomless eyes of nothingness stare back at you, empty pools of black. Expressionless faces wait expectantly as a feeling of dread and all-encompassing fear fill you. You find yourself torn between wanting to help the innocent children, and recoiling in terror at the beings in front of you. Whatever you choose to do… don’t let them in.

Black-eyed children have been reported around the world, and no one can agree precisely on what they are, where they came from, or even when the legend truly started. Are they demonic? Extraterrestrials? Vampires? Ghosts? The jury is still out on nearly every count, but one thing is for certain… they are unnatural and dangerous. We may not know what they want, but judging from experiences thus far, it cannot be anything good. Nearly all experiences share the same basic trademarks. You’ll hear a knock on your door or window, and find a child or children waiting there. They are always unnaturally pale, between the ages of six to sixteen, and have hair or clothing that covers their eyes. Sometimes their clothes will appear slightly outdated, or not something kids or teens of the time would wear.

They’ll ask a favor… to come in, for a ride, or to use the phone. Something small, but you don’t feel comfortable, especially when they begin to get angry if you deny them. Animals cower from them, or even run and hide away from the door. This is unusual, as generally the animals are known to be friendly to everyone. The children will insist you give in to their demands, becoming more forceful if you repeatedly turn them down. Some have even reported feeling themselves doing so, even when they don’t want to. Only once you look away do you break the spell, and fear and dread swallow you whole. When you look back, you’ll see the children have revealed their faces, and you can now see that their eyes are pitch black, no white to be seen.

In 1965, Raymond Morris killed three young schoolchildren, which became known as the Cannock Chase Murders. A real-life monster, he sexually assaulted, strangled, and then dumped their bodies. They were blindfolded when they were taken. Afterward, locals in Cannock Chase began to see young black-eyed children wandering the trails. Here, people are convinced they are the ghosts of those murdered children, with blackened eyes because they couldn’t see when they died. Many believe they are still seeking the justice they never received when they were alive, as there was only enough evidence to charge Morris with one murder. If this is an explanation for all of the sightings, it could be one reason the Black Eyed Children are usually found asking for help, or to make contact with a family member.

Why do the legends of Black Eyed Children unnerve us so? Children are the last bastion of innocence. They are supposed to be all that is good in the world, before the world has a chance to warp them. This legend takes something that is unequivocally pure and twists it, turning it into something to be feared. There’s a reason why many successful horror movies utilize a child as an adversary… it takes a normal monster and makes the situation more fraught with danger. After all, no mother would give up on her child. No sane person would refuse to help a child. In the movies, that’s how they get ya.

All our lives, we are warned of stranger danger, of the perils of opening the doors to someone we don’t know. Oddly, our childhood rituals included going door to door to sell fundraising items, often at the very behest of those that were warning us against such things. Is it any wonder that as adults, our own fears manifest those same childhood uncertainties, the same things that make us leery when we hear the doorbell or a knock on the windowpane? In the end, the warning remains the same; you never know the intentions of the entity on the other side. Those warnings, while perverted by those who aimed to keep us safe, were still a valid lesson that has stuck with us over the ages. Don’t open the door, even for children… and definitely don’t let the strangers in.