All Dogs Go To Hell 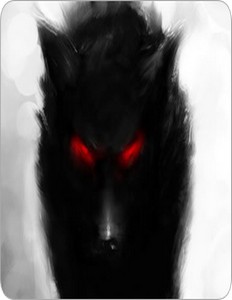 Panic grips you as you push through tangled tree branches, stumbling over upraised roots. Unearthly baying surrounds you, the sounds of pounding paws in the dirt echo your own frantic footsteps as you struggle to escape the endless forest the creatures are pushing you deeper into. As you peer into the darkness, reddened eyes stare back at you from the abyss. There’s nowhere to run. Nowhere to hide. You’re surrounded. Now that they’ve found you, they will hunt you to the edge of the earth and beyond. You can smell their rank, sulfuric breath on your heels, but you dare not turn around. Dropping to your knees, you hear them howl in triumph as you begin to pray for salvation that you know will not come.

From deities to creatures like the Black Shuck, hellhounds, and the Church Grim, folklore and legends are littered with dog-like creatures associated with death and the underworld. Meant to be feared, these dogs are almost always an omen of great evil and impending doom for those who glimpse them. So endearing are the legends that they stretch across nearly every ancient civilization, nearly every religion. The earliest ancient civilization, the Mesopotamians, equated dogs with spiritual and supernatural protection… not just physical! They were said to protect against angry gods, demons, ghosts, and evil spirits in addition to terrestrial dangers.

Described as anywhere in size from a retriever to a horse, most accounts of these canines refer to a large, shaggy dog-type animal with dark fur and red eyes. Some witnesses claim to hear the creatures running, others claim the creatures move in absolute silence, despite their size. No matter the rest of the details, all make mention of terrifying howls and bays from the creatures as they participate in the hunt for their quarry. They are said to be tenacious, once they have a target, they don’t give up. After all, they have no need for rest or nourishment, which makes them the perfect hunter.

In August 1577, the small village of Blythburgh in England is said to have experienced this personally… with evidence. The villagers were in the middle of a terrible storm, a tempest unlike any they’d ever seen. Lightning was crashing all around them, thunder shaking the very earth. It was enough that the parishioners took refuge in the nave of the nearby Holy Trinity Church for safety. As the terrified villagers prayed, the doors burst open. Silhouetted by lightning was the form of a large, mangy black dog with hellfire in its eyes. After killing a man and a young boy each with a single bite, the Black Shuck exited the church, but not before leaving scorch marks across the hewn oak doors. The marks are known locally as “The Devil’s Fingerprints” and they still exist on the door today, an eternal reminder of the things that exist just beyond our capacity of understanding.

What do they want? In most of the legends, they are seen as omens of death and destruction, as agents of the devil. It is said that once you see a hellhound, you are doomed to die within the year. In others, tales of the hellhounds are intermingled with myths of the Wild Hunt, where otherworldly creatures and deities hunt wayward souls at night. Any humans who inadvertently witness the hunt, including the hounds, are at risk. And yet… there exist anecdotal stories where hellhounds have been helpful. In one case, a hound saved a girl from being raped by a friar. Others have led lost travelers to safety. More are seen as protectors of sacred land; they are attacking in spectral form out of duty, not out of malice.

When it comes to legends of demonic dogs, we must remember that these myths arose during a time when superstitions were used to explain many occurrences that are well-understood now, but weren’t then. Wolves don’t attack humans much these days, but in the middle ages, there were plenty of known attacks. Rabies was even less understood. Religious sectors considered dogs unclean, and treated any type of illness and aggression in dogs with religious talismans and exorcisms. This likely led to the association of dogs with the devil and occult. Warning children to stay away from strange canines at the time was likely a lifesaving tactic. Dogs have been our constant companions since time immemorial. Against all odds, we have found ways to coexist with these creatures, to domesticate some, to predate against others. Is it any wonder that our myths, like an ouroboros, bring things full circle and remind us once again that the things we share our world with can and do predate against us?