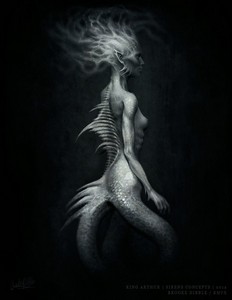 A glint on the glassy sea. A trick of the eye. Nothing more than seafarers tales, they say. Yet, you swear you saw the glimmer of scales beneath the waves. Heard the barest of laughs and an ethereal voice from the fog, a siren’s lure you cannot erase from your mind. Are you going mad, or being ensnared in a spell as old as time? Was that a beckoning hand, summoning you into the deep?

Be afraid, dear sailor. You’ve been caught in the web of one spoken of in whispers. Drawn by the call of one who would beguile and enchant you, only to drag you into the abyss, never to be seen again. You aren’t the only one to be fooled, you surely won’t be the last. These creatures are out for blood and now… they’ve got their sights on yours.

It seems almost every culture, from ancient Mesopotamia to the modern world has a version of the mermaid in their myths. For some, these are deities to be worshipped to prevent peril. For others, they are malevolent creatures to be avoided at all costs. In most legends, mermaids sink ships, doom men, and lure souls to the deep. They are more animal than human, more feral than tame. Only with Hans Christian Anderson’s publication of The Little Mermaid in 1837 did we start to see the beginnings of the modern era of mermaids, a half human, half fish sympathetic creature that longed to join the human world… not harm those that dwelled within it. Walt Disney took the tragic story and created a new fairy tale to appeal to children, one that persists through to modern day.

In a fascinating account that directly disputes the Disney version of a mermaid, Zimbabwe officials are fighting mermaids gone rogue. From kidnappings to murders, all sorts of disappearances near shore had been blamed on mermaids throughout the years. Then, they decided to build a dam. This displeased the resident mythological population enough that they set about terrifying the workers into abandoning the project. Desperate, officials brought in foreigners, hoping people who hadn’t been exposed to the local superstitions regarding the shore residents would be more resilient. Unfortunately, the new crew soon retreated as well, citing suspicious creatures in the water. Traditional rites to appease the mermaids were eventually done, enabling work on the dam to continue.

What are mermaids, though? For some, they are dismissed as cases of mistaken identity. People claim witnesses are seeing manatees, dugongs, and other sea creatures, mistaking them for creatures of lore after a long time at sea. A trick of the light on weary eyes, a tired mind conjuring fanciful things on the watery expanse. It seems hard to believe something like a manatee could be confused with a human form, however, no matter how tired or waterlogged you were.

What about the ones closer to shore? For those, there’s the aquatic ape theory. Some use it to suggest mermaids are possible, at least in theory. The idea is that humans evolved from apes who lived in or near water, not on land. It points to our upright stance, which would help us keep our heads above water; our large sinus cavities, which would support buoyancy; and the presence of subcutaneous fat instead of body hair, how marine mammals stay warm. No other mammals are built quite like us, and this theory attempts to explain why. Perhaps a few of us decided to remain in the water… a place we felt safest, the place we came from.

Mermaids hold public interest so much that a mockumentary on the Discovery channel generated so much interest and outcry NOAA itself was forced to post a press release stating unequivocally that, as of now, no evidence has been found to suggest they exist.

What is it about mermaids that captures our imagination so much? Mermaids are alluring and elusive, feminine and animal, protective and devastating. In imagery, mermaids are almost always beautiful. Duality, literally represented in the body of the mermaid, and transformation, a defining property of water, are central to the mermaid myth. Most depictions and stories are reserved for females. There are merman, but mermaids are vastly over-represented, and most reports of sightings come from men.

The mermaid is literally female incarnate, the eternal frustration of man. We are both the salvation and the doom, depending on which way the wind blows. We are as mysterious as the sea, temperamental and wicked one moment, calm and placid the next. Safe passage through the storm requires being aware of the women in your midst, of worshiping the goddesses properly, as is their due, lest you inadvertently summon the tempest and wake the leviathan. Perhaps those old sailors were on to something, after all.