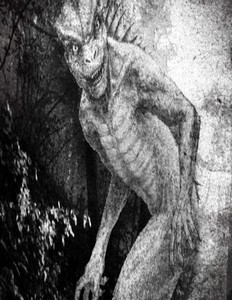 Move to the suburbs, they said. It’ll be safer, they said. Until you’re running through the maze of carbon-copy streets, heart pounding, breathing frantic. The pup in your arms is getting so heavy, but you’re terrified to put it down. All you wanted was to take the pup for a quick potty break before bed. The quiet, tree-lined street was a haven, a refuge from city life. Until you heard scrabbling noises in the night. Saw two yellowish eyes gleaming in the dark, as large as soda cans. Accompanied by a low hiss of warning, you took a hasty step back. Before you could move further, a giant reptilian figure was moving from the drainage ditch at the side of the road, crawling towards you faster than seemed possible. Greenish scales shifted to orange as they reached its belly, razor-sharp teeth glinted in the streetlights. Scooping up your pet, you turned to run, hearing more of the creatures slithering from the drain. You have two choices. Sacrifice one of you as a meal to the voracious pack of monsters at your heels, or outrun them in the maze of suburban streets, if you can.

This was the terrifying story that came out of Anaheim CA in 2008. The victim ended up jumping into the back of a pickup truck, where she managed to call her boyfriend. He came to her rescue with a golf club, managing to fend them off and send them skittering back to the sewers. The couple moved shortly after finding the bloodied remains of an animal splattered on a nearby wall. I can’t say I blame them.

Mining engineer George Warren Shufeld in 1933 stated Hopi Indians had regaled him with stories of Lizard People who had dug catacombs under the cities of the Pacific coast 5,000 years before, including one under LA itself. Shufeld claimed there were large domed cities capable of supporting a lizard race of up to 1,000 families, as well as golden treasure. (There’s always golden treasure, isn’t there?) The thing is, authorities at the time felt there was enough evidence to fund this, and a map was made. New technology was created and a 350 foot shaft was dug. Clearly, people in the area at the time in 1934 felt there was some truth to the claims… or were willing to allow the charade to happen and lose money. The project was abandoned in 1934 after cave-in concerns, loss of media attention, and funding. All that remains today is a unique map, a buried shaft, and the stories.

In Bishopville, SC, vandalism has run wild. Vehicles in the vicinity are getting defaced by an unknown creature… but many have claimed to see the perpetrator. Green-scaled and three-toed, the Scape Ore Swamp is said to be home to a seven foot tall red-eyed reptilian creature with a taste for fenders. Cars in the area have been photographed with claw and bite marks, including punctures and deep scratches down to bare metal. There aren’t any known animals in the location that should be capable of this kind of damage. Locals, however, blame it on the Lizard Man. People claim to see the creature lurking in the swamps, and large three-toed casts have been taken at some scenes of the crimes. What we do know from collected reports is that the Lizard Man of South Carolina appears to be nocturnal and prefers the summertime temperatures, as attacks cease in all other seasons.

So what are these creatures? Overgrown lizards? Mutants? Relics from the past? The largest lizard in the known world is the Komodo Dragon. Restricted to a few Indonesian islands, they are generally around 150lbs, but the largest on record was 10.3 ft and 366lbs. I think everyone can agree this qualifies as a “monster”. Still, there have been no reports of Komodo dragons being able to walk on their hind legs. They also have poor eyesight in dim lighting, preferring to hunt during the day. In current scientific knowledge, no known creatures can explain these sightings of reptoids.

Reptiles are a primal, ancient species. They walked with the dinosaurs… and with us. Large portions of our genetics were coded when we were absolutely not the top of the food chain. Curiosity killed the cat, but it also killed the weakest of the tribe. Evolution ensured our ancestors with a healthy dose of caution survived. When it comes down to it, we were born with an innate fear of the things that predated against us. Even as we became one of the ultimate predators, those instincts remain. The Lizard Man and his ilk are a reminder that it wasn’t so long ago we were the hunted. Maybe we shouldn’t get so comfortable with our spot at the top.